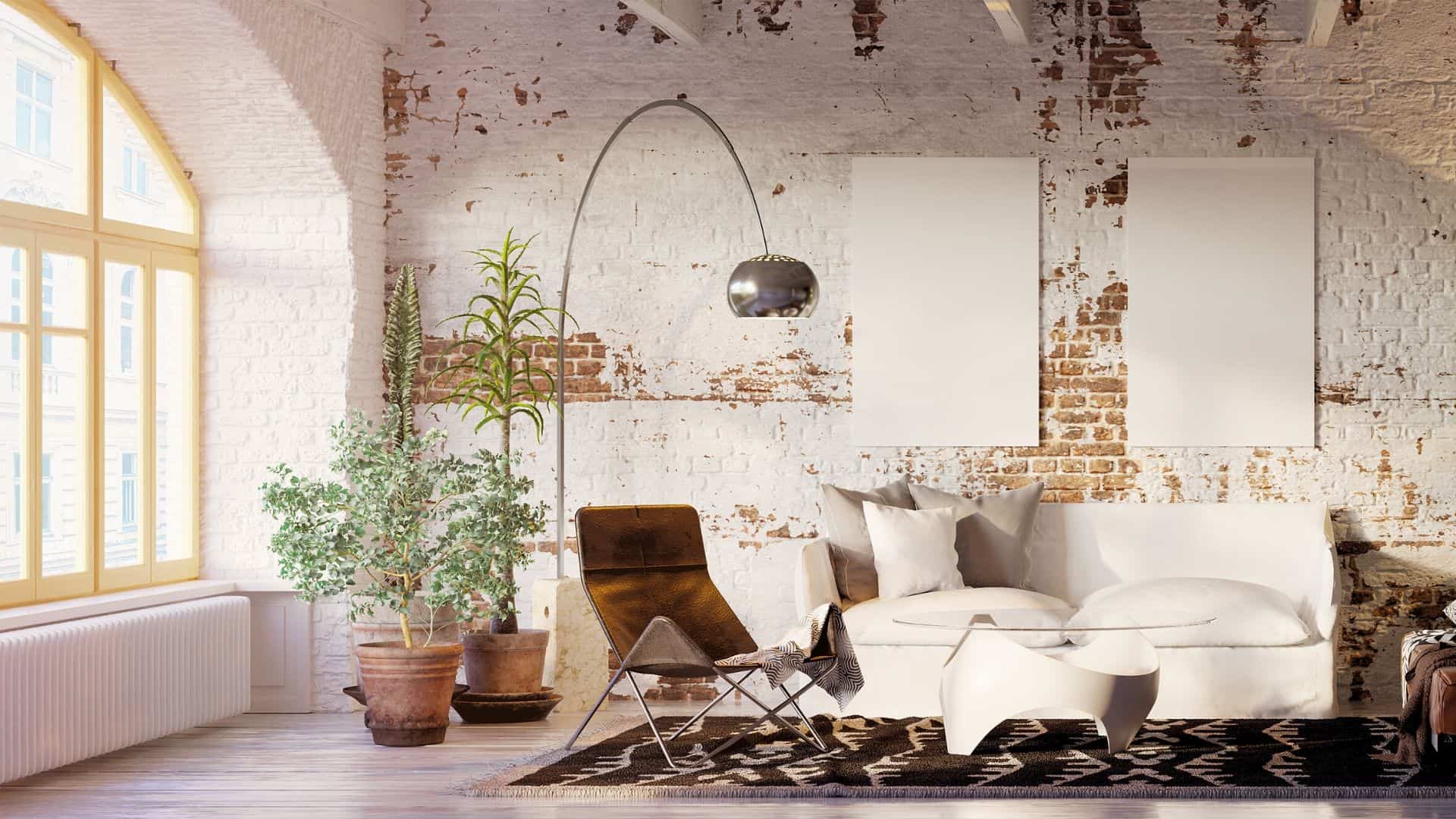 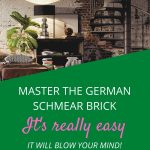 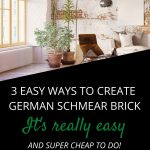 There is just something about German Schmear Brick that makes me go goo-goo gaga. I mean, really, it can transform any outdated and failing facade into a drool-worthy front page magazine-worthy home.

Don’t be fooled into thinking it’s limited to use only on the exterior of your house. It’s commonly used on fireplaces, outdoor sun porches, and laundry rooms, just to name a few.

My friend was on the fence about installing bricks as a kitchen backsplash and then using this technique, which is what lead me to dive into this research.

Hey, my friends always know I’m down to research any type of decor project, which is most likely why she dropped the “not so subtle hint.”

Although I’ve always admired this look, I wanted to compile more information since I was unfamiliar with its full potential and process. 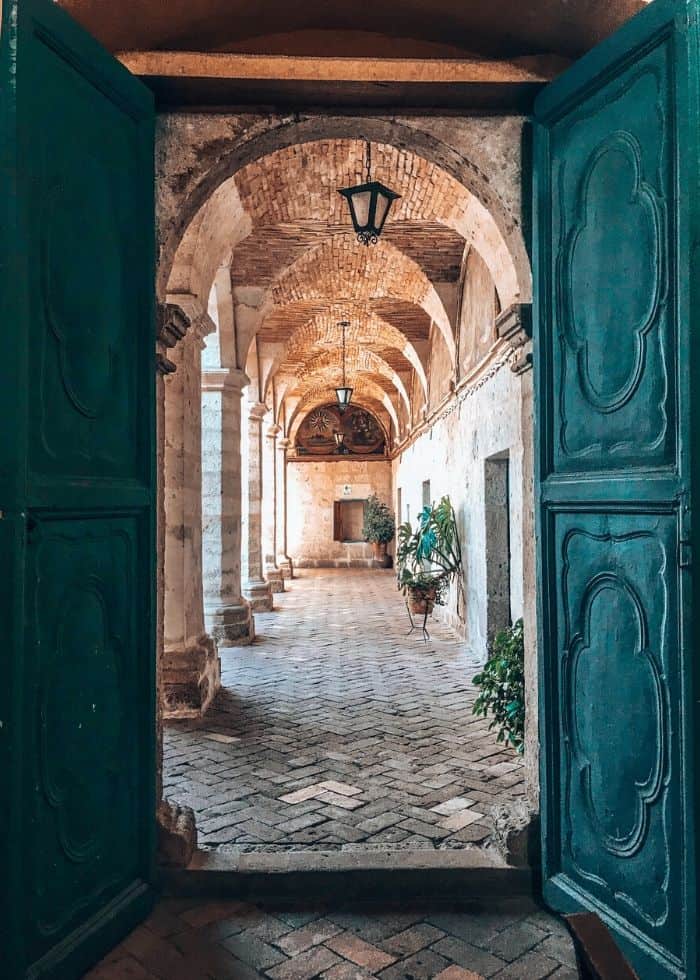 Here are a few fun facts; this technique is not that expensive to accomplish and can be done with beginner level skills. Why? It’s meant to have an imperfect look, so you are not trying to mimic a certain perfect standard.

It became famous as a solution for homeowners who were facing costly repairs on failing bricks. The reason for this is because you are applying a thin coat of mortar, which strengthens the existing walls.  A thicker layer of mortar is applied to weaker areas. Every German Schmear project is unique, and in reality, it’s the imperfection of those problem areas that make it so beautiful. 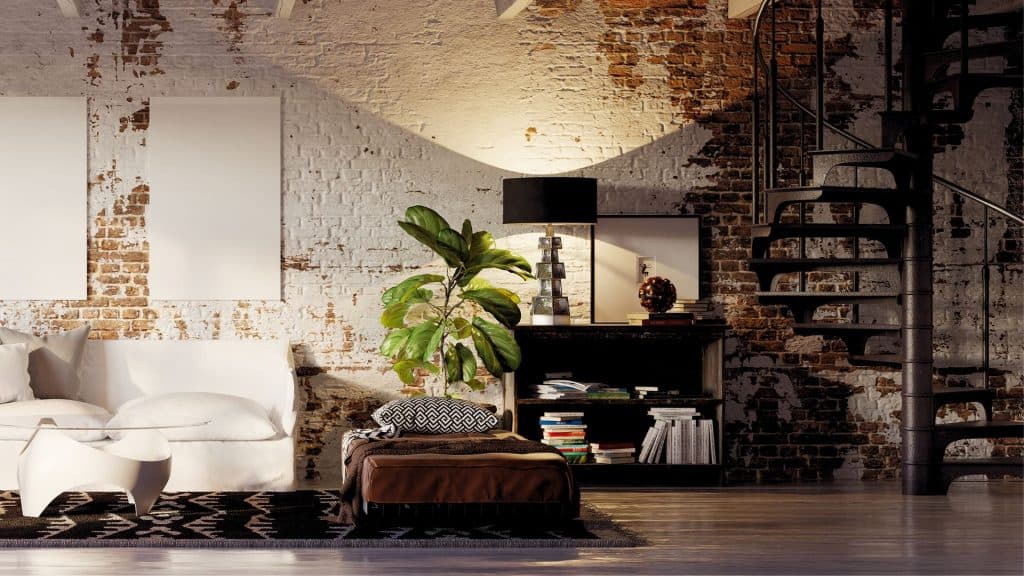 What German Schmear Is and What It’s Not

First off, there are two ways it is commonly known – German Smear and German Schmear. My research only found the following, which was the word Smear is to spread while Schmear is to spread “something.” We will be spreading a mix of mortar over bricks.

Now that we have that out of the way, let’s continue….

The word Schmear has a German origin. Years ago, we visited Germany and toured centuries-old castles and viewed many cottages. We began to identify that German Schmear bricks were on homes that had been repaired.

German Schmear is meant to mimic the look of large mortar joints and irregular stones.  Since no two mortar joints are alike, it provides both character and charm. The mortar also adds texture, roughness, and a rustic distress appearance.

This method is NOT the same as limewashing or whitewashing bricks. Homeowners commonly use diluted latex paint on parts or all brick surfaces to create the whitewashing “look.” However, true Limewash is formed from powdered limestone which has been treated with heat and water to change its chemical composition. This method is done for cosmetic reasons and not for repairing failing bricks and mortar joints.

Other Benefits of German Schmear

With the passing of time, the mortar on brick homes will begin to breakdown. Repairing the original brick is a costly project, and even if you can shell out some cash, the new bricks will probably not match. Painting or whitewashing bricks will not be an acceptable option since you need to repair the mortar.

To have the best aesthetics, your only option would be to repair the mortar and follow up by painting the entire home. A more affordable process, which is also a one-step process is to use the German Schmear as a DIY upgrade. This works well for long-term maintenance, as well.

To sum it up, this method is inexpensive and a one-step process.

This page may contain affiliate links, but this is at no additional cost to you. You can read our full disclosure for more info.

Before beginning, you will want to change into some old clothes since this process is messy! Next, bring all your materials, tools, and necessary items within reach of your working area. Water and the weather will play the most significant factors in how much time you will have to work with.

Mix the mortar in either a 5-gallon bucket or a wheelbarrow, depending on the size of your project.  The consistency should be similar to that of thick pancake batter.

Start with about 30% water to 70% mortar and begin mixing. A thinner mix is easier but messy to apply. It will be more time consuming as more touch-ups and layers will need to be used. A thicker mix will be harder to apply; however, it will be less messy. It will also dry faster, so you need to be able to work quickly.

It is easier to apply the mortar from top to bottom, working in small areas approximately three to five feet wide. Be ready to get your workout in while pushing the mortar into those joints.

To begin, you will need to prepare the brick for the German smear. This involves removing dirt, mildew, and grease. For the exterior of your home, the most efficient way to accomplish this is to power wash your house and use a stiff bristle brush if needed. For interior home projects, use a stiff bristle brush and spray down the brick with a water bottle. It’s essential that the bricks remain wet to allow the mortar to adhere to it.

Create a wet mortar and begin smearing it over the bricks, then remove some of the mortar before it dries.  Apply more mortar to areas that need repair.  Since you are not trying to level or evenly spread the mortar, you can control how distressed your final project will look.

It is crucial to have your objective in mind of your final look. 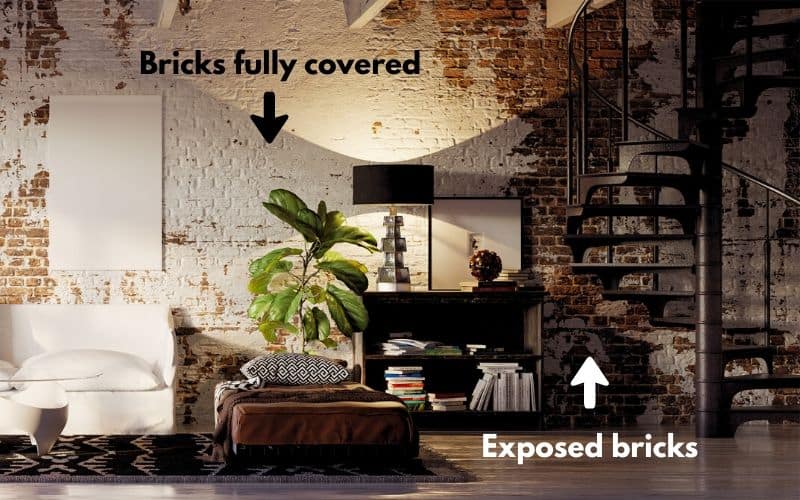 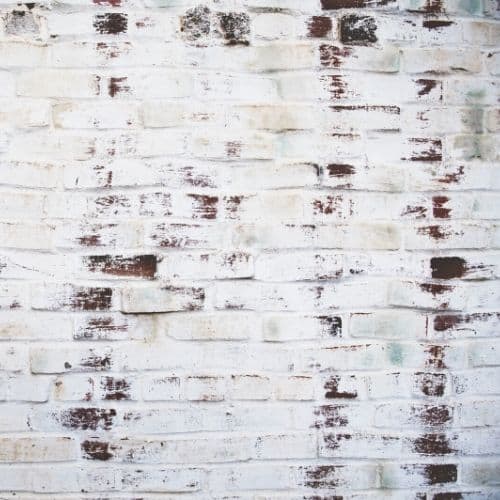 Preparation and research are vital for any home decor project to be successful, which is why I have included videos showing the German Schmear in action.

Now, Erick and Jaime Perkins are not your typical homeowners. They are custom mountain home builders located in North Carolina. Their father, an architect by trade, began Perkins Enterprises over 30 years ago, and his sons naturally became talented housebuilders as well.

In the second video, you will see a different technique used by Michelle. She used the German Schmear technique to change the color of her bricks, which did not need repairing. She is using a sponge in her application, which is an excellent method to follow for interior projects.

The easiest way would be to purchase 3D faux brick wall panels. Usually, these panels are installed with either liquid nails glue and or screws.

Please reference the manufactures instructions for your installation.

If you are a serious DIYer, you may consider this as an option. Did you know that you can make brick veneers? That’s right. I’m sharing this video because I was impressed by the creativity and dedication.

That being said, this is a very inexpensive way to create a faux brick look, but yo – it’s time-consuming!

This video was created by Lowes Home Improvement, and Daniel is building a faux brick wall using woodblocks. If you have a small area such as a backsplash, maybe this would work for you?

If you’re interested in only using real brick, you can install a thin veneer brick at a fraction of the price.  Manufactured brick veneers are also commonly known as concrete brick veneers. They are created with a variety of color options with any decor style in mind. You can even mix and match the brick colors to creating your own unique style and pattern.

Hummm, I don’t think you can go wrong using this technique in any type of décor style. It plays right into the industrial, boho, and eclectic décor styles. Joanna Gains makes it work with anything farmhouse in many episodes of Fixer Upper. Traditional styles are where it is all started, so as far as German Smear Brick goes, it works anywhere!

The final result of using the German Schmear technique will give you a little of that old-world charm.  Hey, I hope you have found this information helpful as you are now a bit more educated on the subject, I know I am!

It’s always best to review different methods people use so you could see which technique is right for you and your home. Oh, before I forget…remember to Pin this post for future reference or share it with a friend, Thanks!

Lastly, I would recommend German Schmear Brick as a DIY project since you do need advanced skills for the finished project to appear professionally done. If you’re looking for some quick DIY furniture projects, take a look at DIY Furniture Hacks To Try

For more home styling tips and tricks drop by anytime. Hey, we’re always up for company. 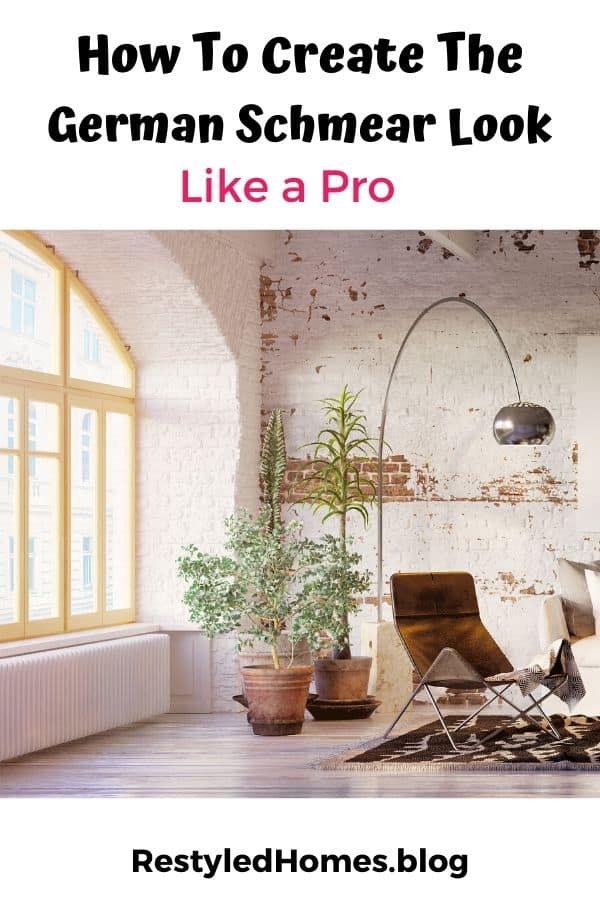 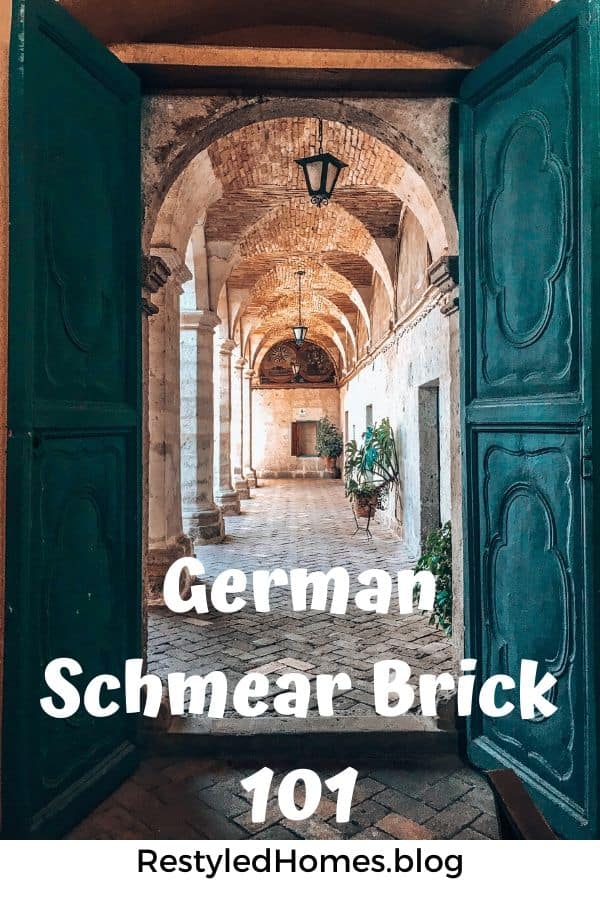 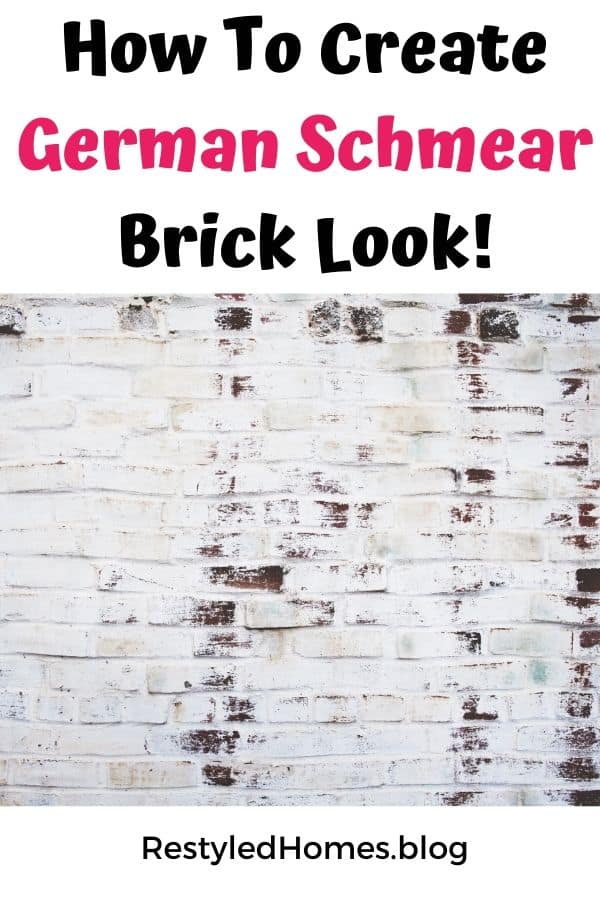 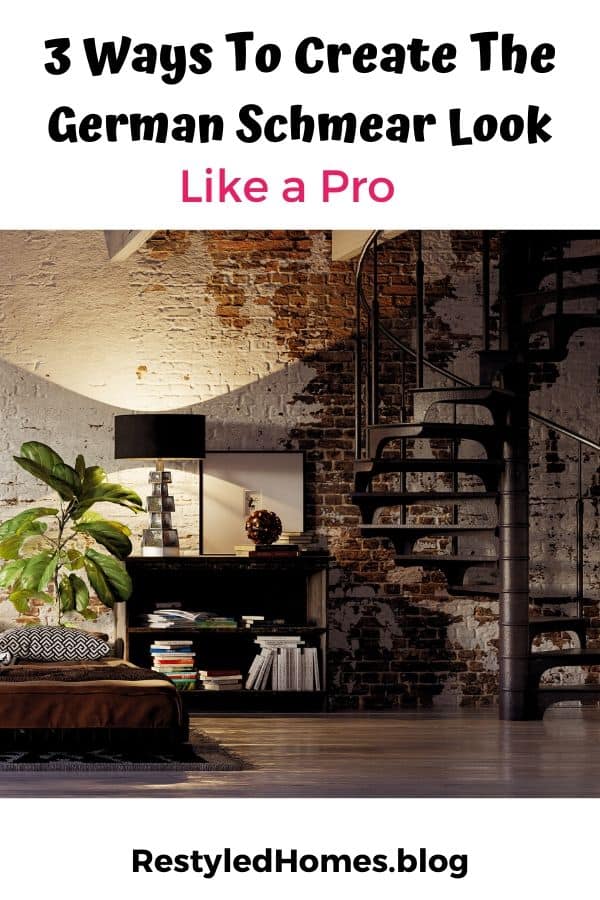 How To Decorate For Kids On A Budget

Decorating On A Dime | Home Styling 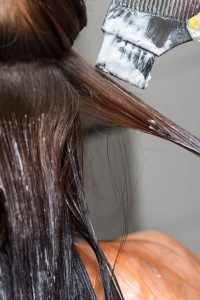 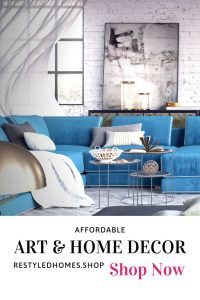